Company F Statue Revealed in the Parade of Lights 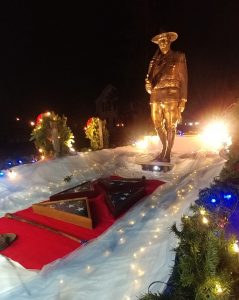 The statue, Company F veteran’s flag cases and personal items such as a bugle, cane and hat on the red carpet adorn the Co F float

It was pure serendipity that allowed us to unveil the freshly cast bronze statue at Medina’s Parade of Lights on November 24, 2018, the most popular annual event in Medina. The statue was complete 2 months ahead of schedule and ready to be transported from the University of Buffalo’s foundry just 5 days prior to the parade. It was kept in an undisclosed location while a team of elves prepared it for its debut.

Co. F Memorial co-chair Lynne Menz conceptualized the float design featuring the spot-lit statue surrounded by an ethereal landscape of white fabric, thule and twinkling mini-lights, framed with festive garland and patriotic vintage Christmas lights on the outside perimeter. The crew mounted a movie screen on the front of the trailer so the 7′ statue (they referred to as Will*) appeared as if he was watching a flashback of how he arrived here.  (We named him Will, NOT after the creator, Bill Menz, but for the shear WILL and perseverance it took to raise the necessary funds to get him made!)

Being the 10th anniversary of the Parade of Lights, the criteria was to feature 10 of “something” on the float. Ten wreaths with white lights were hung in honor of the committee members’ fathers who served in Company F. The truck towing the trailer had three 6’x4′ LED American flags draped on the front and both sides.

Lynne produced a video featuring actual photographs from October 1940 as the soldiers marched from the Armory, boarded the train and went through training prior to the outbreak of WWII. The latter half of the video featured present day images documenting the evolution of the monument. 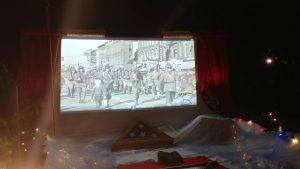 The movie screen at the front of the float with video playing.

To accompany the video, Lynne requested and received permission from Irish Tenor Ronan Tynan to use his recording of “God Bless America”, an extra special connection as he had performed in Medina 2 years ago and is scheduled to return in October 2019. (He had most recently performed at President George Bush’s funeral so that made it all the more special! Bill would have approved!) (Dr. Tynan, we would love to accompany you to the monument when you’re in town this October!)

Also integral to the video was an image superimposed in the lower right hand corner of her late father, Bill who was deeply inspired by the courage and untold stories of the Boys of Company F. That photograph was captured by Cathy Fox during their initial visit to sculptor Brian Porter’s studio. It was a poignant moment documenting his passion for the project, visible by the emotions he was holding in as he studied the larger-than-life clay model that was once a mere concept.

As Dr. Tynan’s version of God Bless America majestically bellowed from the sound system, the crowds along the parade route were speechless, many saluting the newest icon of the community and most applauding. They held back their emotion as the ethereal and patriotically themed float lead the Parade of Lights, making its way east on Park Avenue and north on Main Street. Symbolically, it was the reverse direction of the soldiers marching to the train station 78 years and 1 month previously. Will received a very somber homecoming and for those riding along in the truck (including Bill), it was an incredibly moving experience. Sculptor Brian Porter and his family were watching from the sidelines near the judge’s station and overcome with joy seeing the debut of his creation.

If that wasn’t enough, parade judges awarded the Company F Memorial float the “Community Spirit Award” with a cash prize of $300 and trophy!

Thank you to ALL for helping us give WILL, the Company F statue, a warm Medina homecoming. And, for ALL VETERANS, THANK YOU!

View the video shown on the screen: 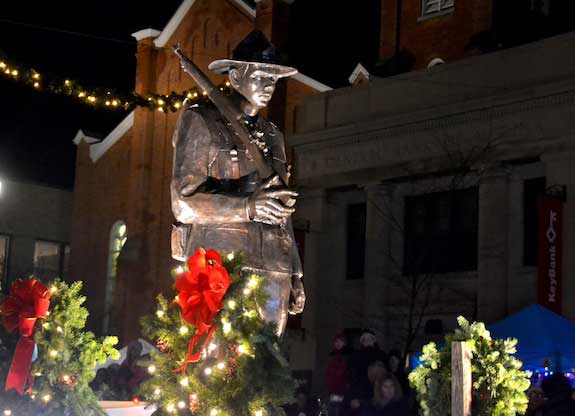