The Company F Statue is on Temporary Display at the YMCA

After approximately 4 years in the making, we are excited to announce that the newest military history icon – the Company F Memorial bronze statue – is HOME! It was revealed to the public by leading the Medina Parade of Lights celebration on November 24th and was kept in storage until it was moved this week to it’s temporary “winter retreat” inside the Pearl Street entrance of the YMCA (former Medina Armory). (The entrance is closed due to the deterioration of the steps outside. A new main entrance is on the Prospect St. side.)

The idea of putting it on display temporarily was a result of the late Bill Menz’s mission to educate future generations of the sacrifices our veterans made for our freedoms. The display,  located outside the Children’s Watch room and Cardio Room, is part of the Company F historical panels that County Historian Matt Ballard commissioned a few years ago. The display allows visitors to get an up close and personal look at this 7′ magnificent work of art, learn the history of the Medina Armory before it became the community activity center and YMCA and even take a selfie (and post #companyfmemorial). 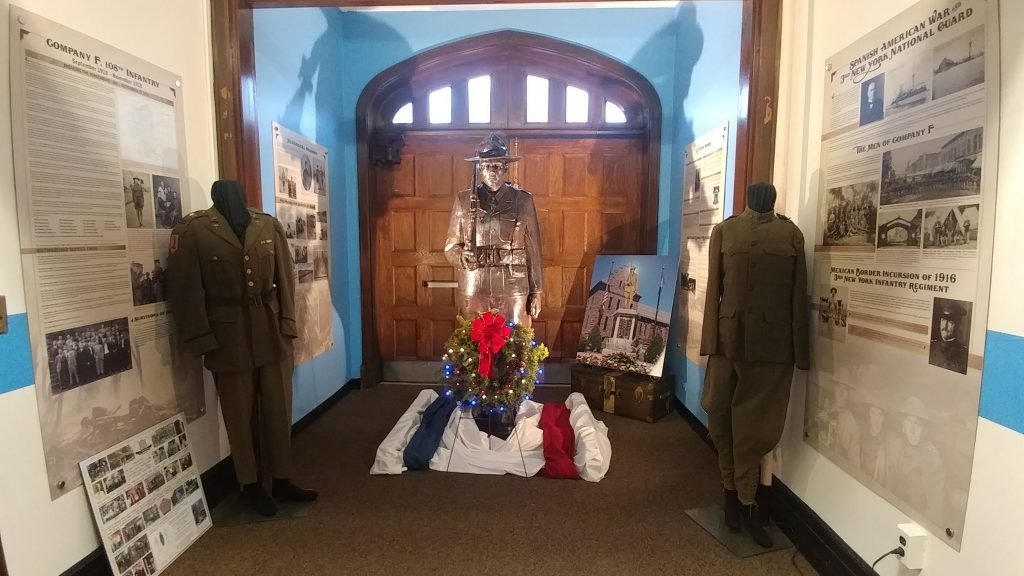 The Company F statue is on temporary display at the YMCA in Medina until it’s mounted to the monument in the Spring.

The Company F Memorial committee wishes to express it’s deepest appreciation to all those that have supported us to make Bill’s vision a reality.

We would be remiss to not include all of our financial contributors who have made Mr. Menz’s dream a reality. (View them here.) Thank YOU, supporters!

And thanks, Bill Menz, for leaving our community this beautiful, moving legacy. We hope we did you proud!