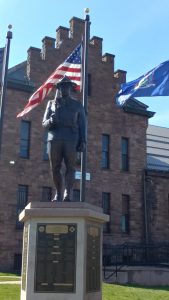 After 13 years of planning, fundraising, constructing and more creating, the Company F Memorial Statue will be dedicated at a formal ceremony honoring the Company F soldiers that trained at the Medina Armory on Pearl Street in Medina, NY from 1898 to 1947.  The Statue Dedication, which launches the 4th annual Orleans County Heritage Festival, will be held Saturday, September 7th, 2019 at 11 AM on the corner of Prospect Ave. & Pearl Street, Medina (on the grounds of the Orleans YMCA, formerly the Medina Armory). A reception will follow in the YMCA featuring historical displays and a Meet & Greet with the sculptor, Brian Porter and UB Foundry Director, Chris Siano.

The monument, a pentagonal shaped column made of Medina Sandstone topped with the 1,400 pound bronze statue is a tribute to over 550 Company F war veterans that battled four major conflicts: the Spanish American War, Mexican Border Incursion, World War I and World War II. The names of each of those local soldiers are inscribed on plaques attached to four of the walls of the monument. The 5th wall memorializes Company C leaders who trained at the Medina Armory during the Cold War era, some of whom served in the Korean and Vietnam Wars. The monument also serves to honor all of our veterans and symbolizes our local military history.

Phase II of the monument, the Company F bronze statue was unveiled to the community in November 2018 when it lead Medina’s Old Tyme Christmas Festival’s Parade of Lights.  Ironically, the parade route was opposite in direction to the route the young soldiers marched in October 1940— from the armory, down Main Street to the train station— as they departed for basic training prior to the outbreak of WWII. The Parade of Lights’ route symbolized the final homecoming, including a brief stop at the former armory. The statue was on display inside the YMCA’s original entrance during the winter and mounted to the monument in April 2019.

Company F Memorial Chairman Bill Menz, a former Company C National Guardsman (1953-58) and an original member of the Armory Action Committee (1978), then Medina Sandstone Society (2004), presented the need for such a monument to the Sandstone Society in 2006 and with their support, he presented the concept to Company F WWII Veterans at their annual reunion. He and fellow contractor, John Fuller built the sandstone structure which was dedicated in October 2008 with several WWII veterans in attendance.

Mr. Menz passed away in July 2018 before the completion of the statue. (See obituary.) However, he was able to visit the foundry in early July to see some of the castings before it was assembled. The committee regrouped and completed Phase III of Chairman Menz’s legacy with the addition of 5 memorial benches encircling the monument, a flag pole for the American flag and lighting.

Attending this most reverent dedication ceremony will be family members of Company F veterans, local and state dignitaries, clergy, veterans, current members of the 108th Infantry, contributors and the group of devoted individuals who worked passionately to bring this monument to fruition. The public is invited to this event which will be held rain or shine.